Apple researchers have discovered that wearable devices like AirPods can be used to estimate a user’s respiratory rate, opening up another potential avenue in biometric health sensor smarts. 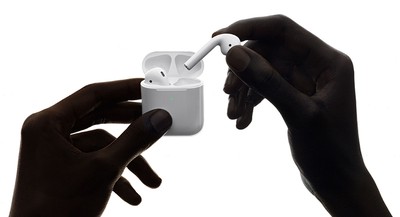 Respiratory rate (RR) is a clinical metric used to assess overall health and physical fitness. In a paper highlighted on the Apple Machine Learning Research website and spotted by MyHealthyApple, researchers found that «wearable headphones» are able to pick up audible inhalations and exhalations during exertion using the device’s on-board microphones.
According to the paper, the appeal of remote estimation of RR is that it offers a cost-effective method of tracking disease progression and cardio-respiratory fitness over time using «accessible, aesthetically acceptable,» non-invasive wearable devices.

Data was collected from 21 individuals using microphone-enabled, near-field headphones before, during, and after strenuous exercise. RR was manually annotated by counting audibly perceived inhalations and exhalations.
A multi-level convolutional neural network was used to achieve signal clarity among other things and the results observed show that RR can be estimated with a concordance correlation coefficient (CCC) of 0.76 and a mean squared error (MSE) of 0.2, demonstrating that audio can be a viable signal for passively estimating RR.
[…]
Results presented validate that RR can be estimated from audio captured using wearable microphones, enabling the detection of heavy breathing conditions and the monitoring of RR changes, a measure of cardio-respiratory fitness, over time. The findings show promise for further development of a respiratory health tool with a larger study cohort.
While the paper doesn’t name ‌AirPods‌ as such, Apple is known to have explored the potential of adding health monitoring features to the truly wireless earphones. For example, one Apple patent describes an earbud-based fitness monitoring system which integrates an advanced biometric sensor that can detect physiological metrics including temperature, heart rate, perspiration levels and more, through skin contact and via built-in motion sensors.
Meanwhile, DigiTimes has suggested that health sensors could be included in ‌AirPods‌ in one to two years, and Apple’s vice president of technology Kevin Lynch in June 2021 said that Apple may one day build health features into the ‌AirPods‌ to provide users with additional health data.
Apple is already expected to add support for respiratory rate tracking via a user’s Apple Watch in iOS 15. Code seen by MacRumors suggests that the Health app will be able to display respiratory rate data after a workout or upon waking up, along with blood glucose highlights and heart rate.
The debut of new health monitoring features in ‌‌iOS 15‌‌ cannot be taken as concrete evidence that Apple is planning to bring them to the Apple Watch Series 7, but we’ll find out soon for sure. The Apple Watch Series 7 is expected to be announced in September, alongside third-generation AirPods that ape the AirPods Pro design.
iOS 15 is available as a public beta. Here’s how to install it.
macOS Monterey is now in public beta. Here’s how to install it.
MagSafe Battery Pack support, the ability to merge two existing Apple Card accounts, HomePod timer management in the Home app, and more.
Learn all about Apple’s new location trackers.
New features for FaceTime calls, tools to reduce distractions, a new notifications experience, added privacy features, complete redesigns for Safari, Weather, and Maps, and more.
Updates for Safari, FaceTime, and many other apps, Universal Control to let a single mouse or trackpad control multiple devices, new Shortcuts app, machine-learning Live Text detection and Visual Lookup, and more.
Redesigned with flat edges, Apple silicon, more ports, improved display, no Touch Bar, and the return of MagSafe charging.
Rumored design changes include shorter stems like current AirPods Pro, but without advanced features like active noise cancellation.